Parents Code of Conduct: Remember....IT"S ABOUT THE KIDS. Your actions, comments and how you carry yourself at the games and practices go a long way in helping everyone have a positive experience. Please be sure to set a good example of how to act as an adult and parent because you represent the club, the players, your child and yourself. Heckling the Referees does no good. These guys are human, have memories and realistically aren't going anywhere so please know that what you say does effect not only your child but their team, and the entire club. Negative communication, taunting or heckling opposing players or parents can lead to situations that can be detrimental to you, the team, players and those in your party. Please refrain from ALL negative confrontation with other teams. It is a competitive situation, lets not add more unnecessary pressure. At no time is the use of foul language, excessive arguing or discussions allowed as it does nothing but distract the players and coaches from the game. If you want to make a scene please do it elsewhere.

If these standards are something you can't follow you run the risk of your child being removed form the club. It's not easy being a coach or a parent. It's even harder to be the coach & a parent. We all need to understand the pressures coaches are under being in charge of a group of kids trying to lead them on the court. Understand that it is a process. MAKE SURE YOU COMMUNICATE WITH YOUR COACH ABOUT DAYS YOUR SON WILL BE MISSING OR GAMES HE WON"T BE AT. As a coach there is nothing more disappointing than kids SHOWING UP LATE or NOT SHOWING UP at all and NOT being told about it. If you have a question about why something is done a certain way or don't understand why this offense is ran etc...please politely ask and we are sure the coach will be able to give you a good response. If you have further questions or concerns feel free to contact us here at the club address.

Parents can play many roles in sport: current or former athlete, coach, fan, motivator, role model or critic. A few studies have shown that family members may influence an athlete’s involvement and achievement in sport more than coaches. Parents also are the first and most critical agents at socializing sports.

Sever's Disease, otherwise known as calcaneal apophysitis is an inflammation of the growth plate in the heel of growing children, typically adolescents. The condition presents as pain in the heel and is caused by repetitive stress to the heel and is thus particularly common in active children. It usually resolves when the bone has completed growth or activity is lessened.

It is named for James Warren Sever (1878–1964), an American Orthopedic doctor, who characterized it in 1912.[1] Dr Sever had "The Principles of Orthopaedic Surgery" published in 1940 by The Macmillan Company. 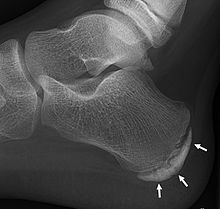 X-ray of the foot of a 11 year old male, showing sclerosis and fragmentation of the calcaneal apophysis. This is a sign of low sensitivity and specificity of Sever's disease, because those with Sever's disease may not have it, and it is commonly present in feet without any symptoms.[2]

The most prominent symptom of Sever's disease is heel pain which is usually aggravated by physical activity such as walking, running or jumping. The pain is localised to the posterior and plantar side of the heel over the calcaneal apophysis. Sometimes, the pain may be so severe that it may cause limping and interfere with physical performance in sports. External appearance of the heel is almost always normal, and signs of local disease such as edema, erythema (redness) are absent. The main diagnostic tool is pain on medial- lateral compression of the calcaneus in the area of growth plate, so called squeeze test. Foot radiographs are usually normal. Therefore, the diagnosis of Sever's disease is primarily clinical.

Sever's disease is directly related to overuse of the bone and tendons in the heel. This can come from playing sports or anything that involves a lot of heel movement. It can be associated with starting a new sport, or the start of a new season. Children who are going through adolescence are also at risk of getting it because the heel bone grows quicker than the leg.[4][5] Too much weight bearing on the heel can also cause it, as can excessive traction since the bones and tendons are still developing. It occurs more commonly in children who over-pronate, and involves both heels in more than half of patients.

Treatment may consist of one or more of the following:

The Strickland Protocol has shown a positive response in patients with a mean return to sport in less than 3 weeks. Further research into the anatomical and biomechanical responses of this protocol are currently being undertaken by the authors. The study was presented at the European College of Sports Science - 13th Congress Proceedings Estoril,Portugal, July 9–12, 2008.[7] Clinical study - Electronic Version ISSN 1536-7290

Sever's disease is self-recovering, meaning that it will go away on its own when the foot is used less or when the bone is through growing. The condition is not expected to create any long-term disability, and expected to subside in 2–8 weeks.[6] Some orthopedic surgeons will put the affected foot in a cast to immobilize it.

While symptoms can resolve quickly, they can recur. Sever's disease is more common in boys than girls; the average age of symptom onset is nine to eleven years.

Parents and athletes need to manage their SportsEngine accounts to ensure they get the most out of their RC Sports experience during each sporting season. With their accounts properly configured, athletes and their families will receive communications according to their preferences and be able to complete registrations more efficiently.  SportsEngine has created a Team Management Guide for Parents and Athletes that will help our members with frequently asked questions about our website and mobile app.

Here is your quick start guide to creating an account and using the SportsEngine platform as an athlete or parent.

STAY CONNECTED TO YOUR TEAM

Keep connected to your team(s). Get schedules and team updates for every athlete in the house, plus a way to message other members on your team and a way to give coaches a heads up about practice. Enjoy unlimited access to scores & stats, photo/video sharing, and more.

In many instances, more than one parent or guardian needs to be in the loop with a child's sports life. Using the mobile app, you can add additional guardians to an account. Guardians can 1) View games and events 2) RSVP to games and events 3) Send and receive messages to coaches and team members 4) participate in team chat

Once you've created your account, add your mobile phone so you can receive text messages from your team manager or coach.

Now that you have your mobile phone on your account, make sure you enable text messaging and any other notifications.

Following a Team on the SportsEngine Mobile App

Are you a family friend, grandparent or fan that wants to follow a specific team on the SportsEngine platform? Here is a quick guide to follow teams on the mobile app.

Do you need a second parent, other family member or nanny to get messages about schedule changes or game times? Add a second email address to forward all communications.

Do you need to send a question to your team manager or another parent about a ride? Follow these instructions on how to send messages using the mobile app.

RSVP to Game or Event

Coaches and team managers need to know if you are going to able to attend a game or practice. You can easily RSVP using the mobile application.

Is your team using SportsEngine Team Management to manage RSVPs, schedules, and communication? This article will provide you with everything you need to know for a successful season!

Bookmark your Website to the Home Screen of your Mobile Device

Having troubles logging in? Reset your password to view your MySE dashboard.